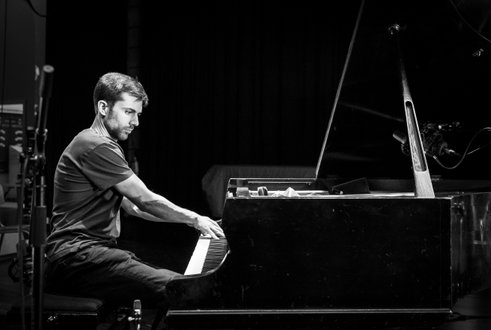 Jonas Cambien (b.1985) is a Belgian pianist, composer and improviser, based in Oslo since 2008, and active on the Norwegian scene for improvised and contemporary music.

Most noted for leading his own trio, featuring André Roligheten on reeds, and Andreas Wildhagen on drums, he has performed on major stages and jazzfestivals in Norway and abroad, and has released three albums with this trio on the Portuguese label Clean Feed: ‘A Zoology of the Future’ (2016) and ‘We Must Mustn’t We’ (2018) and ‘Nature Hath Painted the Body’, all to critical acclaim. The American jazz critic John Sharpe picked ‘A Zoology of the Future’ as one of the 10 best jazz albums of 2016, and said about ‘We Must Mustn’t We’:  ‘They sound like no-one else.’

Jonas Cambien performs regularly in duo with the Norwegian bass player Adrian Myhr, often teaming up with the french visual artist Xavier Quérel. The album ‘Simiskina’ was released on Clean Feed in 2017, and was named ‘some of the best you will find in Norwegian improvised and free music’ by the Norwegian Jazz magazine Jazznytt. Cambien has also released albums with the improvising collective Platform (Vafongool 2015, Clean Feed 2017) and the alternative rock band Karokh (Loyal Label 2015, No Forevers 2016). He is a founding member of Aksiom, an Oslo-based ensemble for contemporary music.

Jonas Cambien is active within the Oslo-based band Majaz, a band that dedicates itself to repertoire from the arab world. In addition, he has performed regularly in Egypt, and participated on several recordings, amongst others with oud player Aly Eissa, bassist Ahmed Nazmi and percussionist Ayman Mabrouk.